Taglialatella Galleries is thrilled to host its third New York based exhibition comprised entirely of artwork by the world renowned Banksy. With over 30 works on display, BANKSY: Unmasked is now open to the public through the end of the year at our Chelsea location. The collection includes iconic images from the artist, including Girl with Balloon, Love is in the Air, NOLA, Stop & Search and more. Taglialatella Galleries welcomes you to expierience our virtual viewing room created for this exhibition.

Taglialatella Galleries is thrilled to host its third New York based exhibition comprised entirely of artwork by the world renowned Banksy. With over 30 works on display, BANKSY: Unmasked is now open to the public through the end of the year at our Chelsea location. The collection includes iconic images from the artist, including Girl with Balloon, Love is in the Air, NOLA, Stop & Search and more. Taglialatella Galleries welcomes you to expierience our virtual viewing room created for this exhibition. 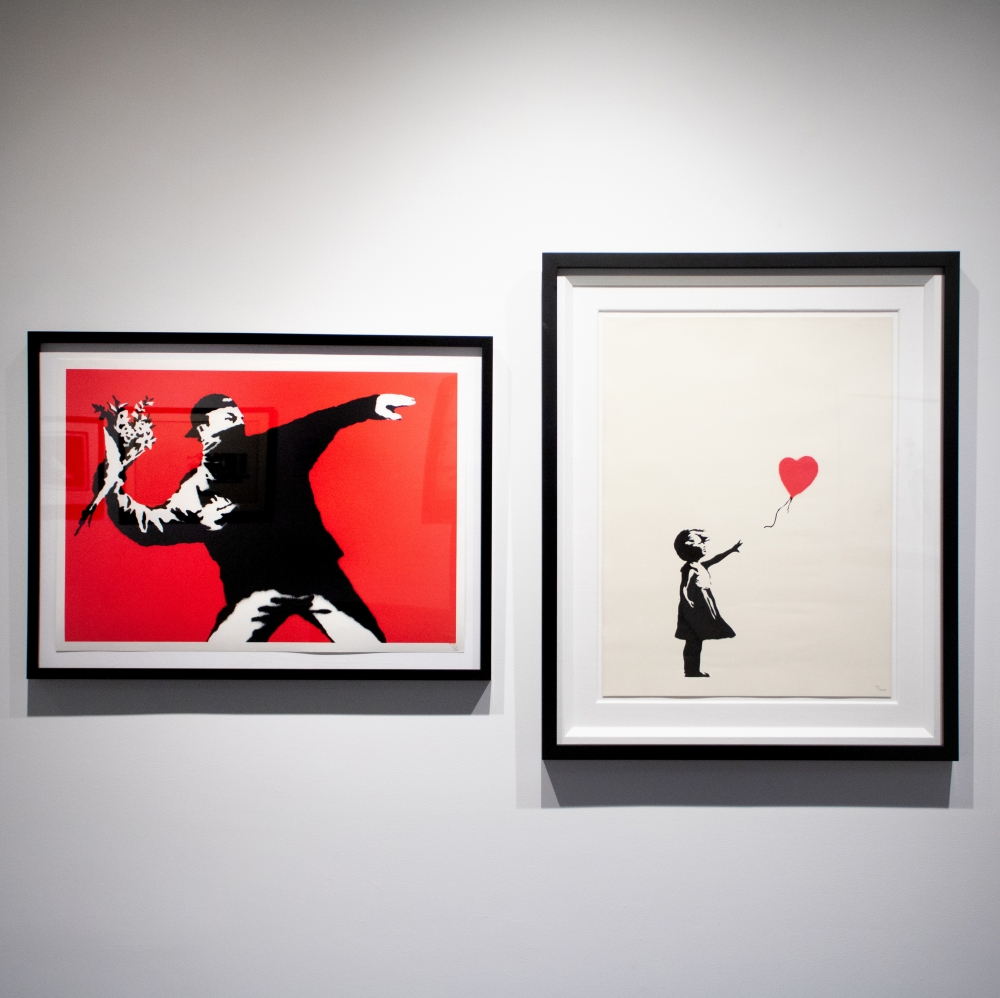 Girl With Balloon
Girl With Balloon is amongst Banksy’s most recognizable and sought-after works. It depicts a girl reaching for or releasing a heart-shaped balloon, a symbol of childhood innocence and hope. The black and white stencil prints have been printed with red, purple and gold balloons, the latter two of which have set auction records in the print category in recent years. The red Girl With Balloon painting was also the subject of Banksy’s 2018 Sotheby’s stunt when the painting shredded itself upon the fall of the gavel, which attracted a media frenzy and catapulted the image into the public eye.

Love is in the Air
Love is in the Air, one of Banksy’s best known figures, was first stenciled in large format on the newly constructed West Bank Wall in Jerusalem. In a region torn by conflict, this image was a statement by the artist about the desperate need for peace. Instead of launching a grenade, the young man prepares to throw a bunch of flowers — a universal symbol of peace and kindness. The delicate flowers are juxtaposed with the figure’s aggressive stance, and through this tension Banksy creates suspense that takes the breath away. 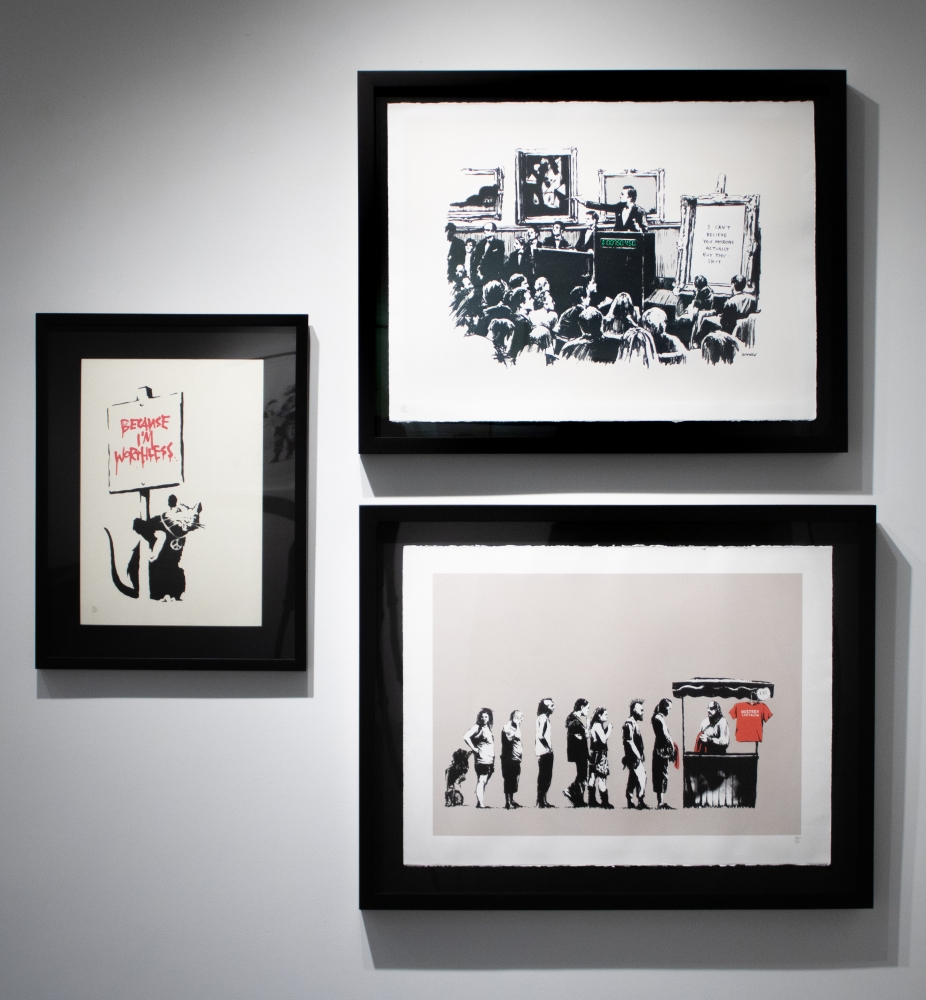 Morons (White)
Every year that Bansky’s name and works continue to skyrocket, so does the irony of this print. The inspiration for his mockery of the art world stems from the record-breaking 1987 Sotheby’s auction of Van Gogh’s Sunflowers, which fetched over £22,500,000 and became known as the first ‘mega lot’. Since the introduction of Banksy’s own lots at auction, his works have fetched record-breaking prices by the very collectors he disparages. Most ironically, his purple Girl With Balloon set the record auction price for any print in September 2020, at Christie's auction entitled: “Banksy: I CAN’T BELIEVE YOU MORONS ACTUALLY BUY THIS SHIT”.

Festival
A motley crew of festival-goers lines up to purchase $30 anti-capitalist shirts in this print. What some may qualify as rebellious youth are not above feeding into the capitalist system in order to demonstrate their very opposition. Capitalism runs even through the fringes of society, with people from all walks of life contributing to it however unwittingly. What, after all, has led to Banksy’s artistic success?

Because I'm Worthless
Banksy took inspiration from George Marshall’s book Escape the Rat Race for this work, which was intended as a guide for people to escape ‘salary slavery’. The rat has since become synonymous with Banksy’s oeuvre, and here it represents the victims of worker abuse and the mistreatment of laborers by large corporations. The rat wears a placard (widely associated with protesters) that reads “Because I’m Worthless” -- a pun on the mega cosmetic brand Loreal’s tagline ‘Because I’m Worth It”. 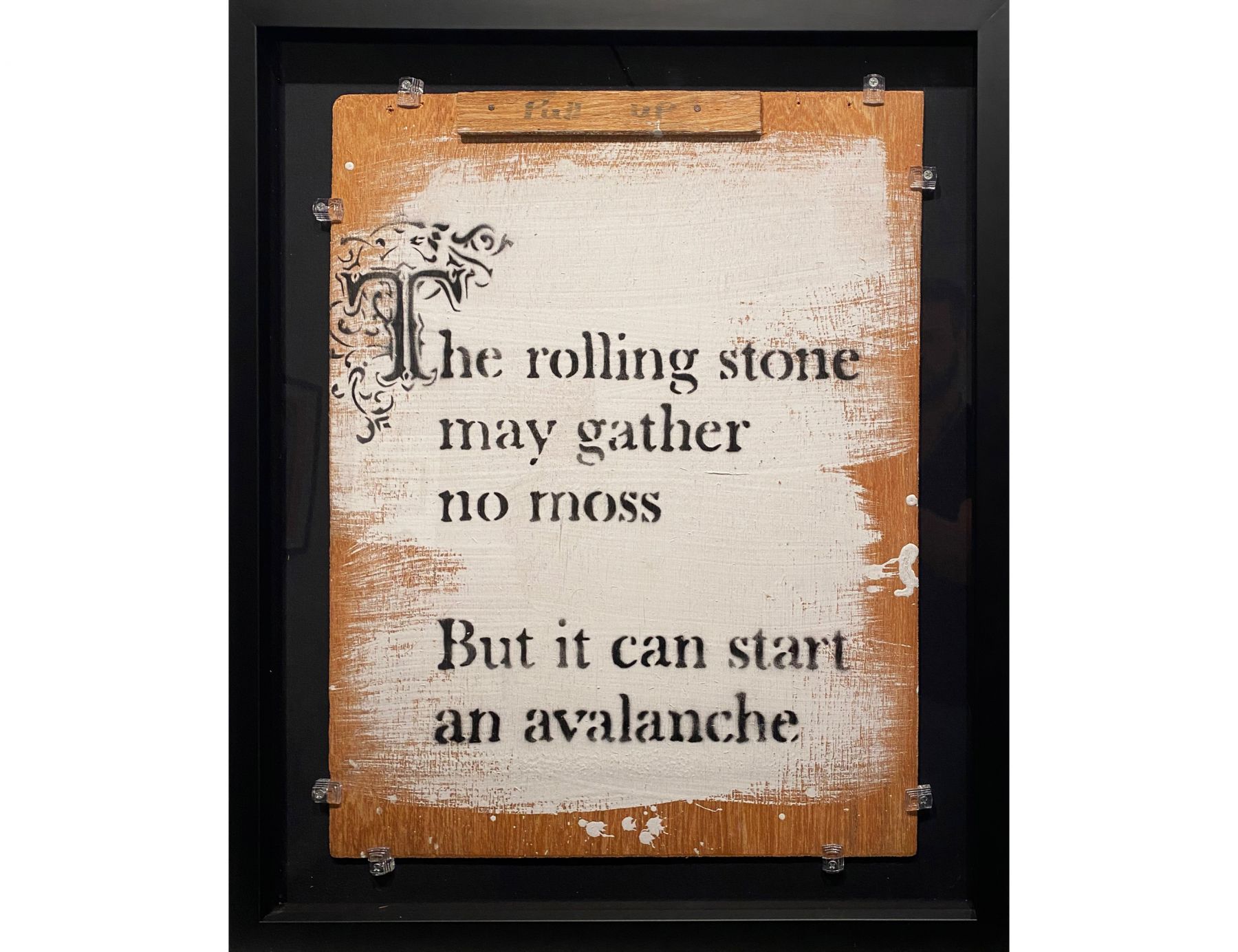 The Rolling Stone May Gather No Moss...

Most casual Banksy followers have a misconception of Banksy as a rogue, one-man operation;  a vandal who sneaks from place to place under the cover of darkness stenciling his messages political commentary or  dark humor and moving on to the next one. However, if you inspect the many projects and public graffiti done throughout Banksy’s career, you will find that his artwork is extremely collaborative and often incorporates imagery and ideas from other artists, writers, musicians, and contemporaries throughout various creative fields.
In this particular case, The Rolling Stone May Gather No Moss… painting is a collaboration between the artist and an English comedian, Simon Munnery, who wrote the text for an entire series of works Banksy would famously stencil on repurposed wood, often from crates or boxes, in a font style you  might expect to find in a classic novel or fable. To further the distinction of a collaborative work between creatives, this painting was originally owned by Ronnie Wood, guitarist of “The Rolling Stones”, prior to being sold on the secondary market. 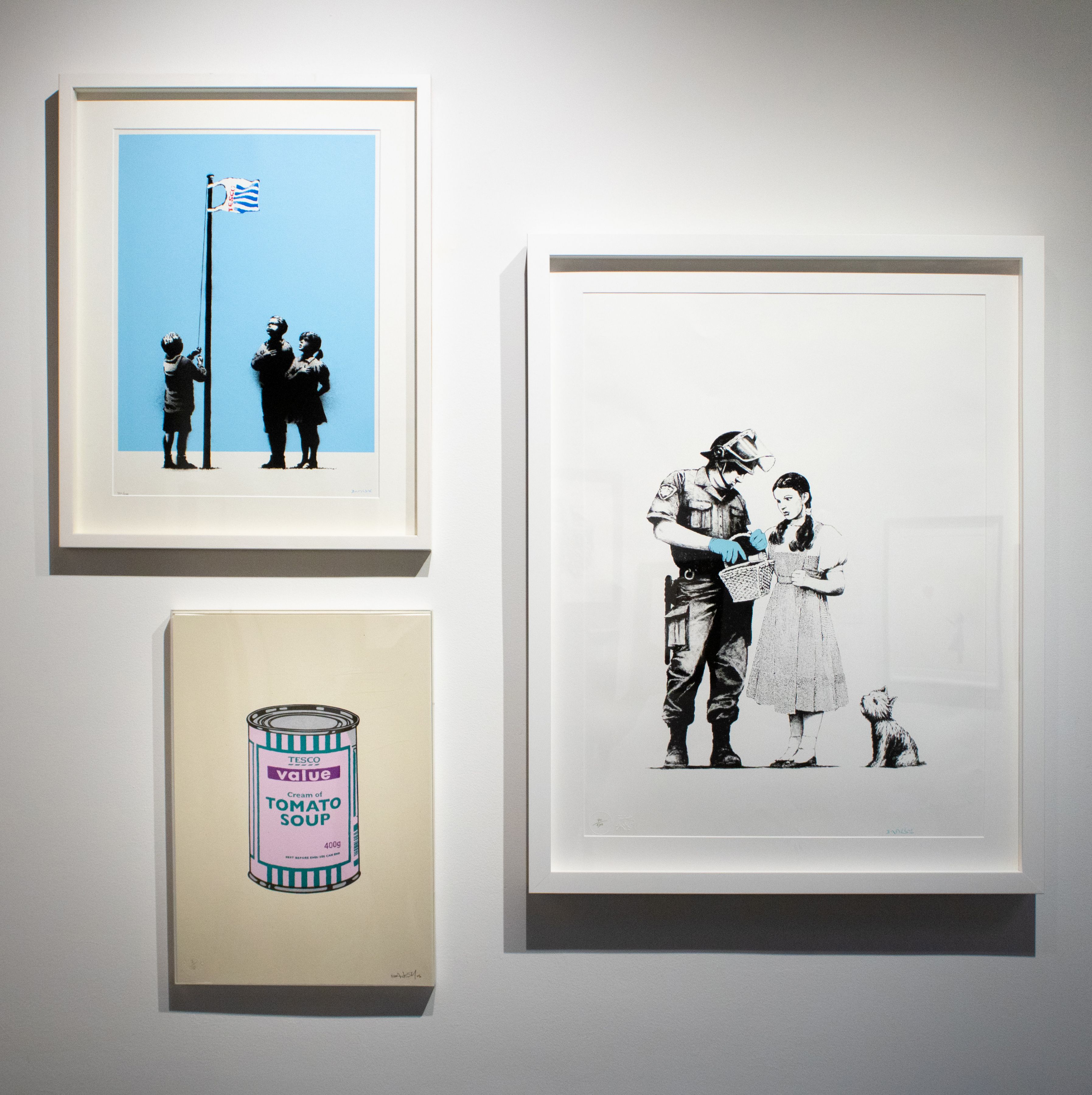 Soup Can (Lilac)
Banksy’s twist on Andy Warhol’s Campbell Soup Can paintings, Soup (Lilac) depicts a Tesco soup can, which the artist printed in editions of various colors. Rather than a celebration of the images reproduced in popular culture, Banksy’s version of the soup can print is an indictment of consumer society and the giants that have taken over the contemporary marketplace. The cream colored background endows the print with a vintage feel, something Tesco and other mega-brands have tried to bring back in recent years, perhaps to mask the overt commercialism of their products.

Very Little Helps
Three children gather around a flagpole as one raises an empty Tesco grocery bag instead of a flag in Very Little Helps. Banksy uses the brand Tesco to represent the large chains that have overtaken the market, cleverly warping its tagline “every little helps” in the title of this print. The children in this print hail the ‘flag’ -- an empty symbol of commercialism and monotony. Banksy once again delivers a biting criticism of our societal values and what we are passing along to the younger generation. 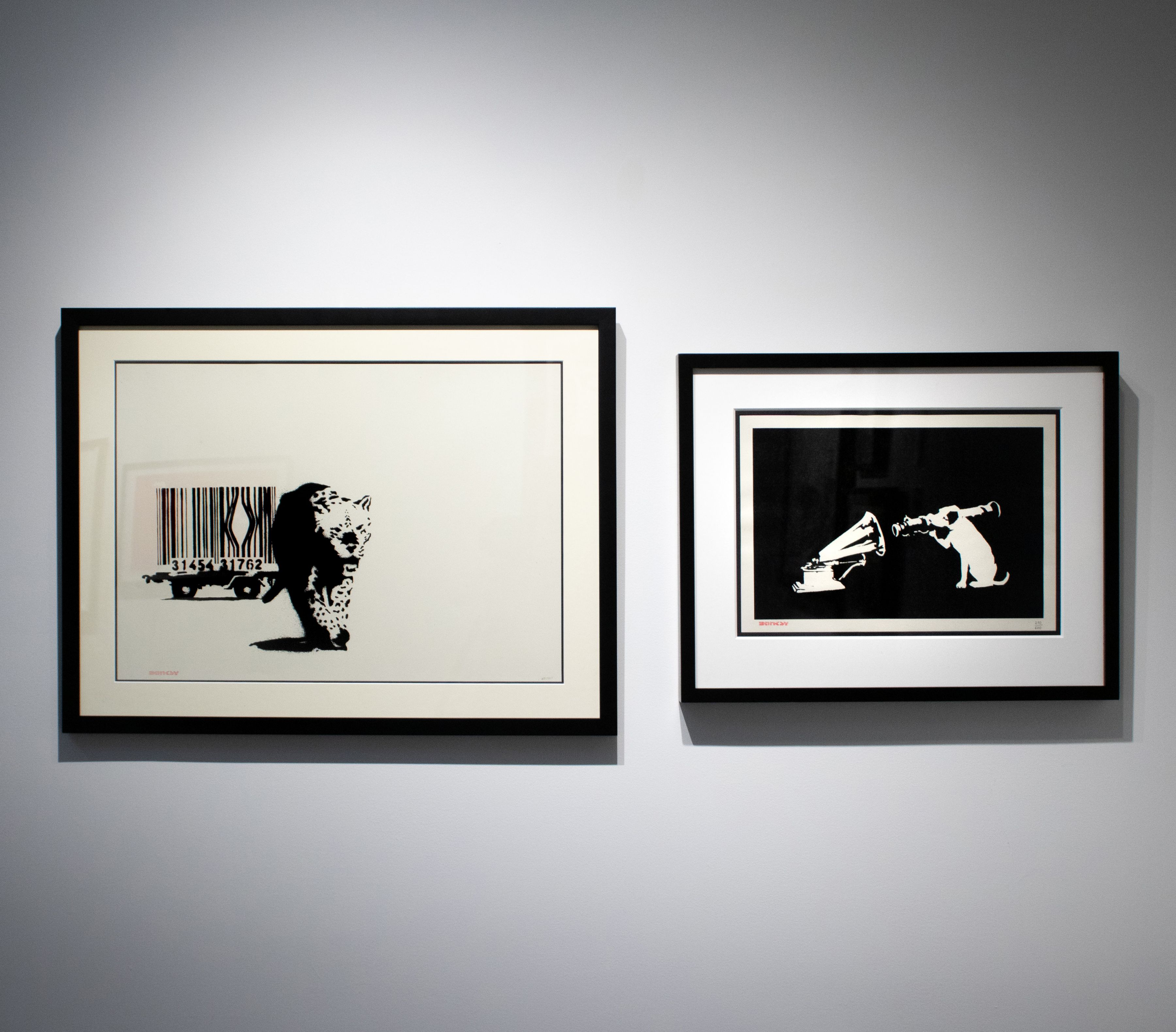 Barcode
Barcode is one of Banksy’s more nebulous pieces in terms of its room for interpretation. Both the barcode and leopard are unique in their own right, but are at the same time at odds with each other: one represents the monotony of the products we consume while the other represents all that is untouched by man. They both stand for speed and efficiency, where one is a tool to make uniform all that we consume and one is a beast that refuses to be tamed. When pitted against each other, which is more powerful? Banksy clearly advocates for nature breaking through the cages we have manufactured for ourselves and our fellow animals.

HMV
Banksy first tagged his home city of Bristol with this graffiti of the entertainment firm HMV’s well-known logo, altered so that the dog is aiming a bazooka at the gramophone instead of listening to it. Later made into a print, the work has been interpreted many ways since its appearance in the early-2000s. Its bold black-and-white stencil style and subversion of a beloved British symbol have since become emblematic of Banksy’s oeuvre. His success as a street artist and the potency of his messages rely on this kind of appropriation of household images, which catch attention and force reflection on their deeper significance. 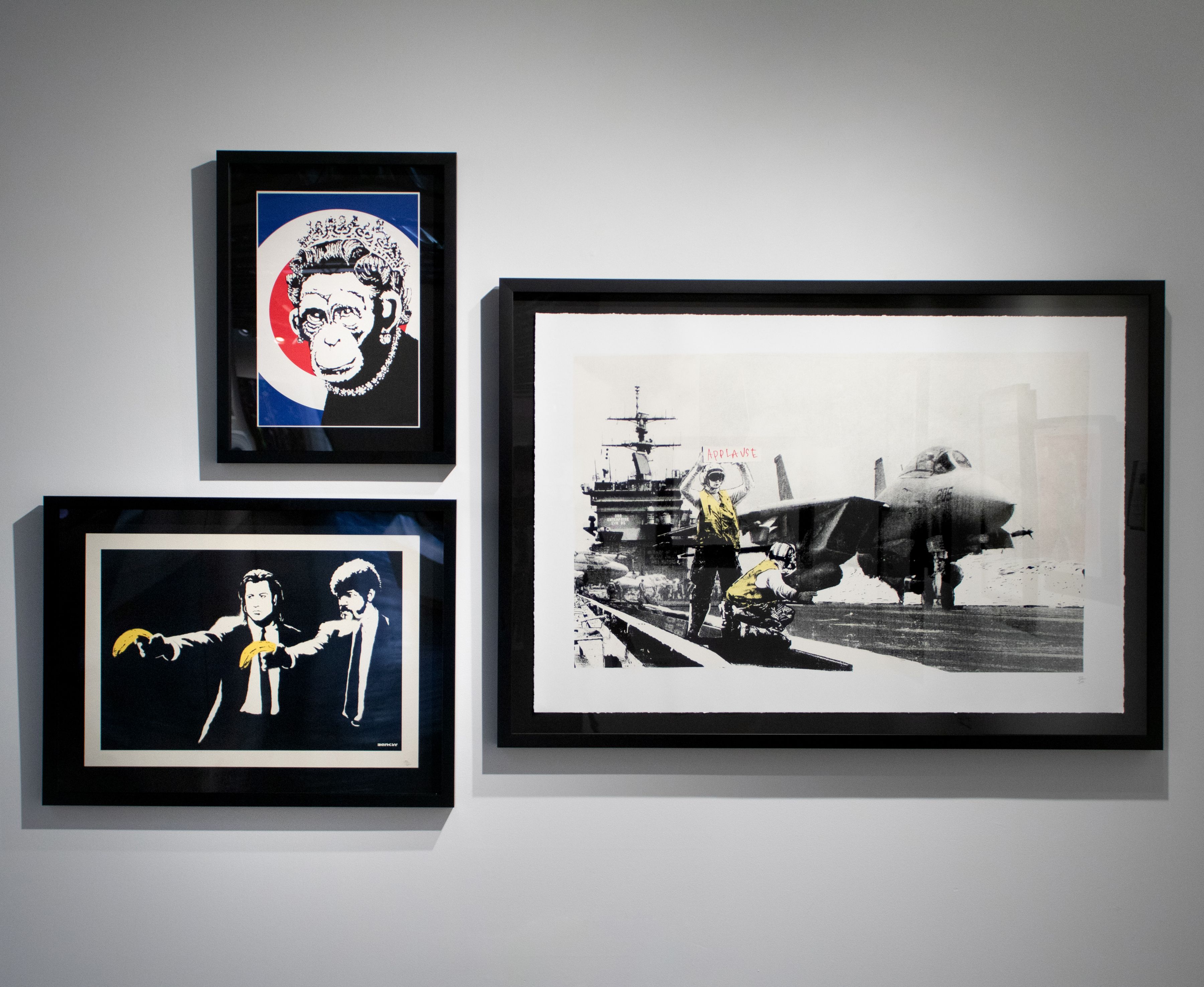 Applause
This image is based on the well-known photograph of George Bush deploying a military bomber in. The traffic controllers hold a sign that reads “Applause” as the fighter jet gets ready to take-off, as though leading an audience in a comedy show. The detailed, sketch-like print speaks to the desensitization of the public to certain images, and the sensationalization of these graphic depictions of war and violence by the media. Applause remains ever relevant in today’s devisive and turbulent world.

Pulp Fiction
Originally stencilled in a London tube station in 2002, Banksy’s Pulp Fiction is a play on the iconic scene with John Travolta and Samuel L. Jackson in the oscar-award winning movie by Quentin Tarentino. The work has since been painted over by the London transportation authority, who covered the work thinking that it was intended to promote violence. The parody lives on in a limited edition of screenprints by the artist.